The 2020 Nobel Prize in Chemistry was awarded to the French scientist Emmanuelle Charpentier and the American Jennifer Doudna, who in 2012 developed and for the first time were able to reproduce the method of genome editing. This was reported on the website of the award. 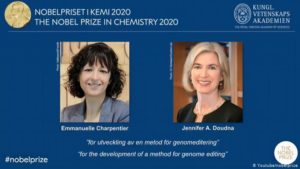 The essence of the discovery

Emmanuelle Charpentier and Jennifer A. Doudna discovered one of the most sought-after genetic engineering tools, the so-called CRISPR / Cas9 genetic scissors. With their help, researchers can alter the DNA of animals, plants and microorganisms with extremely high accuracy. It is necessary to learn more about the inner workings of life.

Previously, such cell modification was a laborious, sometimes impossible task. With the help of the CRISPR / Cas9 genetic scissors, it is now possible to change DNA within a few weeks.

How did they open

As is often the case in science, the discovery of genetic scissors was unexpected. Charpentier investigated one of the bacteria most harmful to humanity and discovered a previously unknown molecule, tracrRNA. Her work showed that this molecule is part of an ancient bacterial immune system, CRISPR / Cas, which disarms viruses by cleaving their DNA.

Charpentier published her discovery in 2011. In the same year, she began collaborating with Jennifer Doudna, an experienced biochemist with extensive knowledge of RNA. Together, they managed to recreate the genetic scissors of bacteria in a test tube and simplify the molecular components of the scissors to make them easier to use.

The tool has contributed to many important discoveries in basic research. With their help, plant researchers were able to develop crops that are resistant to mold, pests and drought.

It may interest you :  What Is The Distance From The Earth To The Moon?

In addition, scissors can be used in medicine. Clinical trials of new treatments for cancer and hereditary diseases are already underway.

Share
Nvidia's new technology will improve the quality of video calls using AI Previous post
Should I complain if the financial institution made a mistake? Next post