Microsoft Edge gets function to share tabs between Windows and Android

Microsoft Edge is getting a feature that allows users to share tabs between the Windows and Android versions of the web browser. This feature is currently being tested in Edge’s Canary build. The feature is not yet available for macOS or Linux. 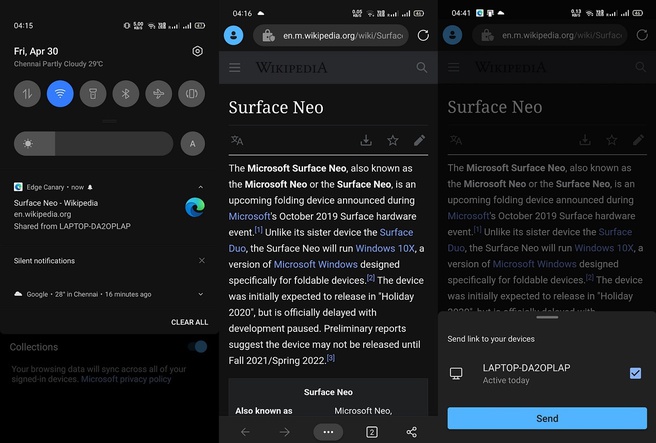 Some users of the Edge Canary build v92.0.873.0 for Windows can share tabs with Canary Android build 92.0.870.0 and vice versa, Windows Latest noted this week. For example, users can use the feature to easily view tabs from a phone on a desktop.

Users can try out the feature by right-clicking the tab to be shared. A list of devices synced with Edge will then appear in a pop-up menu, after which users can click ‘send link to [device name]’ to send the tab to their Android smartphone. Users receive a notification on their smartphone when they receive a tab. The operation is comparable to a function integrated in Google’s Chromium browser; Microsoft Edge is based on Chromium.

The function also works the other way around; users can choose in Edge for Android to send tabs to another device. This works via the ‘send to devices’ button in the menu of the mobile web browser. The link should then appear in the Windows 10 notification center.

The feature is currently being tested in Edge’s Canary version 92. Supposedly, the feature will be available to all users with the stable release of Edge 92. According to the schedule of which Microsoft will update during the week of July 22, although this is subject to change.