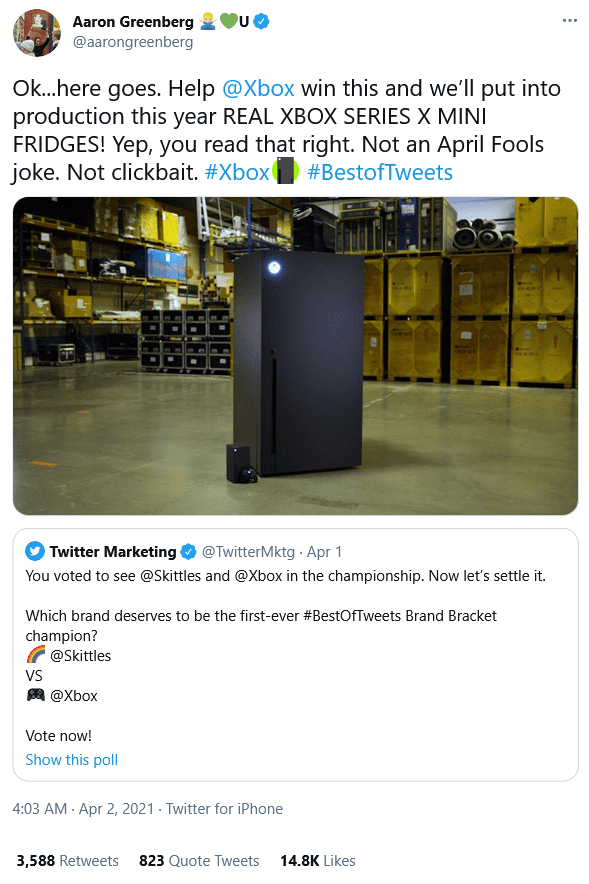 Twitter organized a popularity contest through polls between different brands active on the platform. Participants included Skittles, Gatorade, Oreo, Airbnb, Spotify, MTV and more. In the last lap Xbox and Skittles had to compete against each other and that race was pretty even until the last moment. Greenberg therefore threw up the promise that the Xbox mini fridges would actually be made if the brand won. It did so with 50.5 percent of the 340,000 votes.

Microsoft has been joking about the Xbox Series X refrigerator for some time. When the Xbox Series X and S were initially unveiled, it was sometimes joked that the X variant looks like a refrigerator. Microsoft went along with that by assuring gamers that the console will be significantly smaller than a refrigerator, and also came up with a side-by-side comparison . Then it went one step further : it made a real full-size refrigerator with the design of the Xbox Series X. Two copies of it came off the production line; one went to Xbox enthusiast Snoop Dogg and the other was raffled off.

It is not known how big this mini fridge will be, nor how many will roll off the line, where they will be for sale and what they will cost. It is known that they have to go into production this year.